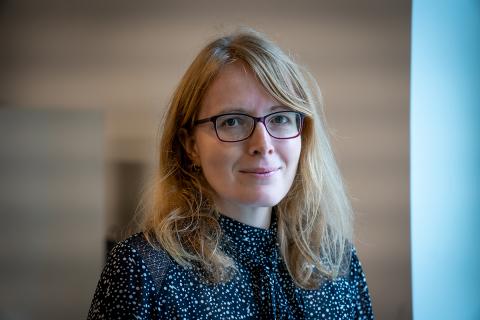 Marine Godaux was appointed Director of European and International Relations on September 1, 2022. She is stepping in for Christophe Sodore, who has held the position since 2009.

A graduate of the Magistère de relations internationales et action à l’étranger (MRIAE) program and holder of a Master’s degree in European Studies and International Affairs from Paris I Panthéon-Sorbonne University, Marine Godaux began her career in 2006 at CNRS as a European Projects Engineer.

She then joined the Institut Pasteur from 2008 to 2010, where she was tasked with developing its external funding and supporting researchers in national, European and international research projects.

Marine Godaux then joined the INRA (now called INRAE) as a European Affairs Officer. There, her duties included promoting the visibility and scientific research objectives of INRAE to facilitate its access to European funding, particularly in the areas of food, bio-economy, and the environment.

In 2014, she joined AgroParisTech as an International Partnerships Project Manager for the Managing Director. In January 2016, Marine Godaux contributed to the creation of the institution’s European Affairs Unit, where she was tasked with supporting the institution’s European educational and research projects, for which she is now responsible. Since 2020, Marine Godaux has also served as Assistant Director of European and International Relations.

As the new Director of European and International Relations for AgroParisTech, Marine Godaux will be tasked, among other things, with defining the institution’s internationalization strategy, coordinating its international activities, consolidating its international position and network, developing incoming and outgoing study and work abroad opportunities for students, and ensuring the implementation of cooperation projects.